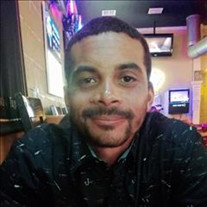 Dominic Marlowe Harris went to be with the Lord on September 7th, 2021 at the age of 38. Dominic was born to Charles and Brenda Starr Jaime Harris on December 6th, 1982. Dominic is survived by his wife of 18 years, Stephanie Harris, his beautiful daughters Jada, and Charlees, brother, Rassie, nephews, Ethan and Seth Harris, Darius and Jubriel Johnson and niece, Kaya Harris. Dominic's family meant everything to him and he would do anything for them. His girls were his treasures and he always made sure they were treated as such. Our beloved was humble, positive, and a high-spirited Godly man. He had a great sense of humor and a very light-hearted personality. He was wise and always knew when to share his words of wisdom. Dominic was a strong man up who always guided us through our toughest obstacles. Dominic loved thy neighbor and emphasized every conversation and relationship he established with everyone who crossed his path. He was a father figure to his nephews and many other young men. He was honored to be so, as he loved Ethan and Seth as if they were his own. He wanted the best for them as young men in this big world. Dominic was like none other, he wore his heart on his sleeve and never hesitated to show his soft and tender soul. He always put everyone before himself and cared so much for every living being whether you were a friend of a friends or furry companion. He loved life and was very rooted in Christ. Even when all the odds were stacked against him Dominic always pushed forward for his family through his faith and belief. He was light at the end of the tunnel for anyone going through hard times. He was a noble friend and mentor to many. Everyone who has come across him has truly met a one of a kind. Dominic was the best father a girl could ask for and the most loving, caring, and thoughtful husband. He had a heart of gold, and an infectious laugh that was full of love and life. His light was too bright for this dark world and he was called home early to watch over and guide us from above, until then his beautiful way of being he will forever remain in our hearts, until we meet again. Visitation will be held 4-6pm Saturday, October 2nd, 2021 at Salser & Dillard Funeral Chapel, 127 E. Caldwell Ave., Visalia with a Celebration Of Life to follow. Services have been entrusted to Salser & Dillard Funeral Chapel. Memorial Tributes and condolences may be offered by logging onto www.salseranddillard.com.

Dominic Marlowe Harris went to be with the Lord on September 7th, 2021 at the age of 38. Dominic was born to Charles and Brenda Starr Jaime Harris on December 6th, 1982. Dominic is survived by his wife of 18 years, Stephanie Harris, his beautiful... View Obituary & Service Information

The family of Dominic Marlowe Harris created this Life Tributes page to make it easy to share your memories.

Dominic Marlowe Harris went to be with the Lord on September...

Send flowers to the Harris family.