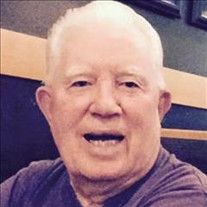 Dewey Lee Turner, 76, went to be with the Lord on November 21, 2021, in Visalia, CA. Dewey was born to Wallace Lynn Turner and Velma Ruth Neumann on February 24, 1945 in Reedley, CA. His sister Patricia Darlene and brother Roger Dale followed to complete their family of five. Dewey grew up in Reedley, Dinuba and Sanger, and accepted Jesus Christ as his Savior at Camp Sugar Pine at the age of 12. He attended Sanger High School (class of 1963) and graduated with an Associate's Degree in Business Administration from Reedley College before enlisting in the U.S. Navy in 1965. He married Raymona Maureen Rhea on October 3, 1966, in Sanger, CA. He completed U.S. Navy basic training at San Diego Naval Station, served on the USS Richmond Kelly Turner and the USS Dennis J. Buckley and was stationed at the US Naval Liaison Office to the British Admiralty on Gibraltar from 1969 to 1970. Transitioning from active duty to the Naval Reserves in 1970, he worked as a technician and manager in the copier sales and service industry for 30 years, and finished his career serving in Child Support Services with the State of California before retiring in 2012. He was a deacon in his church for over 40 years, serving in many capacities as the church had need. Dewey enjoyed working on his cars and anything mechanical, assisting friends with their projects, studying the Bible, attending church and exploring the Sierra Nevada by dirt bike with his sons. He is survived by his wife Raymona, sons Nathan Turner (Kristen) and Tim Turner (Kari), brother Roger Turner (Debbie), brother-in-law Gary Helm and six grandchildren. He was preceded in death by his parents and his sister Darlene Helm. Dewey's wish for each of you is that you would come to know, if you don't already, the amazing love of Jesus Christ and accept His gift of salvation. He wants to see you again, in Heaven! A Visitation will be held on Wednesday, Dec. 1 from 4 PM to 7 PM at Salser & Dillard Funeral Chapel in Visalia. A Memorial services will be held 11 AM Saturday, December 4th, 2021 at Rise Church, 5207 West Caldwell Ave, Visalia. In lieu of flowers, the family requests donations to one of the following organizations: Visalia Rescue Mission - www.vrmhope.org Sugar Pine Christian Camp � www.sugarpine.org Samaritan's Purse - www.samaritanspurse.org Services have been entrusted to Salser & Dillard Funeral Chapel. Memorial Tributes and condolences may be offered by logging onto www.salseranddillard.com.

Dewey Lee Turner, 76, went to be with the Lord on November 21, 2021, in Visalia, CA. Dewey was born to Wallace Lynn Turner and Velma Ruth Neumann on February 24, 1945 in Reedley, CA. His sister Patricia Darlene and brother Roger Dale followed... View Obituary & Service Information

The family of Dewey Lee Turner created this Life Tributes page to make it easy to share your memories.

Send flowers to the Turner family.