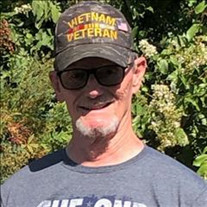 Derald Stanley Gilbert, 74 of Visalia, California, died on November 15, 2021, in Fresno, California. Derald was born to George Thomas Gilbert and Anna Midwell on September 26, 1947 in Lodi, California. Derald attended and graduated from Redwood High School and joined the Military soon after graduation. During his four years in the Army, Derald served in the Vietnam War, where received a Purple Heart for injuries he sustained during the War. After completing his Military service, Derald began his career at Waterman's Industries, where he worked for 40 years. Derald retired from Waterman's in 2012. Derald had many interests, which included camping, hunting, as well as wood and metal working. Derald was also an avid collector of guns and knives. Derald is survived by son, Brian Gilbert; daughter, Teresa Perkins; daughter-in-law and son-in-law, Dona Gilbert and Billy Perkins; his five grandchildren: Dylan, Kayla, Samantha, Randy, Eric; and three Great-Grandchildren. Derald is also survived by three Sisters-in-law and numerous nieces and nephews. Derald is preceded in death by Tina, his wife of 47 years; his parents, George and Anna; his six brothers and his only sister. Derald will truly be missed by all who loved him. Visitation will be held 9-11am Saturday, November 27th, 2021 at Salser & Dillard Funeral Chapel, 127 E. Caldwell Ave., Visalia with a Service Of Remembrance with military Honors to begin at 11am. Services have been entrusted to Salser & Dillard Funeral Chapel. Memorial Tributes and condolences may be offered by logging onto www.salseranddillard.com.

The family of Derald Stanley Gilbert created this Life Tributes page to make it easy to share your memories.

Send flowers to the Gilbert family.