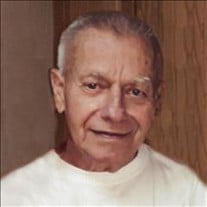 David got his wings on Christmas Day, December 25, 2021. He left this earth with his loving wife and family near his side. Cancer was the reason for his departure along with a heart condition and dementia. David left behind Earline, his loving wife of 51 years, his loving daughter Sandra Bennett and son-in-law Rich of Bellingham, Washington. His two step-sons Terry Showalter and Karl Simerly of Visalia. Granddaughters: Samantha Moa of Bellingham, and Amber Simerly of Visalia. Grandsons: Lil David Bennett of Bellingham, Lance Showalter and Kyle Simerly of Visalia, nine great grandchildren and other loving family members and many friends. David was preceded in death by his father Gilbert Myers, mother Maxine Myers and sister Sharon Willis. David was born and raised in Visalia and attended Washington and Jefferson elementary schools and Mount Whitney High School. As early as high school, David's passion was building and racing boats. A self-taught perfectionist, starting in his dad's garage, he established Myers Fiberglas and during his over 50 years of experience became ever more diversified with his skills, building: cheese tanks for Leprino Foods , chemical spray tanks for local companies and was well known outside of the area for his unique expertise. He had the talent and ability to design and build a multitude of fiberglass items. He also built their cabin in the Ponderosa plus three buildings on Doe Avenue. Always generous with his time, he freely shared his knowledge with others. He designed and built the hull of a world record holder in blown fuel hydro boats "Problem Child". He was also an avid member of the Tulare County Men's Trade Club. David's other interests included: his annual Colorado deer and elk hunting trip for well over 35 years and his need for speed which was met early on by award-winning flatboat racing and of late by watching NASCAR races. He also enjoyed traveling with Earline for business, as well as pleasure. In their 51 years of marriage they traveled within and out of the country and enjoyed the diversity of their travels. Hard-headed and bighearted he was loved by many, although his best friend was his boxer Megan Myers. In lieu of flowers, donations may be sent to Kaweah Delta Hospice or the charity of your choice. A service and celebration of life will be held at the Visalia Country Club on Thursday, January 6, 2022 at 11:00am. Services have been entrusted to Salser & Dillard Funeral Chapel. Memorial Tributes and condolences may be offered by logging onto www.salseranddillard.com.

David got his wings on Christmas Day, December 25, 2021. He left this earth with his loving wife and family near his side. Cancer was the reason for his departure along with a heart condition and dementia. David left behind Earline, his loving... View Obituary & Service Information

The family of David Gilbert Myers created this Life Tributes page to make it easy to share your memories.

Send flowers to the Myers family.