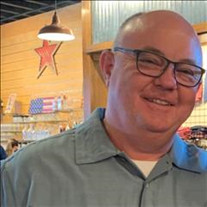 October 17, 1965-September 25, 2021 A patriot, loyal friend, loving father and husband and a great American who served his country, David Harrell passed away on September 25, 2021, at the age of 55. David was born in Tulare and raised in Strathmore. He was a lifelong Tulare County resident, living in Strathmore, Porterville and Visalia. He joined the U.S. Army in 1985 and served in the Army from January 7, 1985 through March 15, 1990. He then went on to serve several years with the National Guard. A sergeant in the Army, David served on the DMZ in Korea. He also served with the 1506 Currahee Airborne Unit. While with the Porterville National Guard he responded to the 1992 Los Angeles riots following the Rodney King verdict. While in the Army, David was also part of the 100-mile club, having run 100 miles. David's support and love for veterans was well known as he participated in numerous veterans causes. One of his other causes close to his heart he never gave up on was trying to bring justice for the deaths of Tracy McMath and her unborn son. David went on to work as a correctional officer and eventually graduated as class leader from the College of the Sequoias police academy. For the last 20 years he worked as a police officer at Porterville Developmental Center. He also taught at the Porterville College police academy as he was the arrest and control instructor. David was also an expert in Jiu Jitsu and trained others in MMA fighting. It's not an overstatement to say David touched the lives of thousands of people all over the U.S. He was known for his infectious smile and for his laughter that would fill a room. David is survived by his wife, the love of his life, Tabbetha, and his three daughters, Nicole, Vanessa and Elizabeth, who he also loved dearly. He's also survived by his sister, Debbie Ramirez. A Memorial Service will be held 4pm Saturday, October 9, 2021 at Salser & Dillard Funeral Chapel, 127 E Caldwell Ave., Visalia, CA. With David touching the lives of thousands of people from all over a webcast of the service will be provided. There will be no graveside service. David wanted everyone to remember him just as he was. There will be chance for anyone at the service who would like to say few words about David. For those who can't make the service but would like to have their message be presented at the service, the can call or text Elizabeth, [email protected] David's wife and daughters said they would love to see all his friends and family at the Memorial but understand not everyone will be able to make it. David's wife and daughter also ask everyone to share information about the service so as many people as possible know about it. There will also be a Celebration of Life 2pm Sunday, October 10, 2021 at the Visalia Veterans Memorial Building and lunch will be provided. The Patriots Pub, one of David's favorite places, will be providing drinks as well. Services have been entrusted to Salser & Dillard Funeral Chapel. Memorial Tributes and condolences may be offered by logging onto www.salseranddillard.com.

October 17, 1965-September 25, 2021 A patriot, loyal friend, loving father and husband and a great American who served his country, David Harrell passed away on September 25, 2021, at the age of 55. David was born in Tulare and raised in Strathmore.... View Obituary & Service Information

The family of David Wayne Harrell created this Life Tributes page to make it easy to share your memories.

Send flowers to the Harrell family.