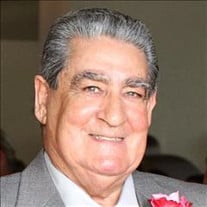 David P. Cardoza was born on May 11, 1935 to Maria and Pedro de Brum Cardoza in Tulare, CA and entered into eternal rest on March 9, 2022. Dad, Big Dave, and Uncle Dave were a few of the names that David went by, but his most treasured title was Grandpa Dave. He attended Mt. Whitney High School in Visalia, CA. He married the former Carolee Finch in 1954 and shortly after came their firstborn, David. Sixteen months later, they welcomed their daughter Lisa and then their daughter Kerri was born three years later. As a young family man, he was employed by Wilson Meat Company and later went on to pursue his passion in the dairy industry. Over the years, he owned and/or operated several dairies throughout Tulare. Later in life, he became a state brand inspector and finished his working career as a hay and dairy supplies salesman. David loved raising and racing homing pigeons which was a hobby that brought him great joy and many special friendships. Another source of joy was supporting others in their journey towards sobriety, where he was able to counsel and mentor numerous individuals drawing upon his own personal journey. He was humble yet proud of his 32 years of sobriety. Always one who loved a great party, you could find him spending time with his family and friends at every chance he could get. He would often create his own party by doing drive by visits without an announcement at any time of day or night. We could also count on him to check on our animals whether it was in the calving barns, chicken coops, or heifer pens. David is predeceased by his mother and father, daughter Lisa Trigueiro, brothers John and Gil Cardoza and sisters Elvera Correia and Geri Elliott. He is survived by his son, David Cardoza and daughter-in-law Kimberley and daughter Kerri Santos and son-in-law Mike and son-in-law Mark Trigueiro. He is also survived by the mother of his children, Carolee Cardoza and his sister Beverly Ross. He is also survived by his eight grandchildren: Marissa Castro (Steve), Michael Santos Jr. (Leslie), Shannon Ormonde (Brandon), Craig Santos (Laure), Lindsey Trigueiro, Alison Wilson (Richard), Justin Cardoza (Ashley), and Kimberly Johns (Mike). He also leaves behind to cherish his memory his great grandchildren: Kassidy, Carson and Cole Castro, Carter, Presley and Noelle Santos, Mark and Case Aldape, Hayden and Hunter Ormonde, Beau and Charlotte Wilson, Rylee and Reid Cardoza, and Claire and Kate Johns. Services have been entrusted to Salser & Dillard Funeral Chapel where the viewing will be held on Tuesday, March 22 from 4-6pm followed by the recitation of the Holy Rosary at 6pm. A funeral mass will be held on Wednesday, March 23 at 9am at his home parish, St. Mary's Catholic Church in Visalia. Graveside services immediately following at Tulare North Cemetery. In lieu of flowers, please consider making a donation to St. Aloysius School where many of his great grandchildren attend. Memorial Tributes and condolences may be offered by logging onto www.salseranddillard.com.

David P. Cardoza was born on May 11, 1935 to Maria and Pedro de Brum Cardoza in Tulare, CA and entered into eternal rest on March 9, 2022. Dad, Big Dave, and Uncle Dave were a few of the names that David went by, but his most treasured title... View Obituary & Service Information

The family of David P Cardoza created this Life Tributes page to make it easy to share your memories.

Send flowers to the Cardoza family.