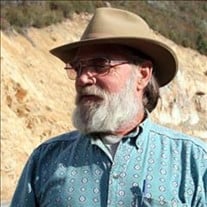 David Irvin Boling Jr. Born on December 18th, 1946 in El Dorado, KS Died on January 18th, 2022 in Tulare, CA Aged 75 years Lived in Tipton, CA Cause of Death: Heart failure due to COVID Pneumonia complications David Irvin Boling Jr. was born December 18th, 1946 in El Dorado, Kansas to Irvin & Eunice Boling. They relocated to Woodville when David was around the age of 3. He had 5 brothers and 1 sister. They lived on Lowe's Ranch where Irvin worked. David attended Woodville Elementary School and then Tulare Union High School until his Junior year. He received his GED and some automotive trade schooling during his two years in the United States Air Force. He married Aileen Mentz in Oildale in 1966 then fathered two children Julia Boling in 1967 and Charles Boling in 1985. During his lifetime, he held many jobs and owned several businesses including: Philip's Gas & Service Station on the corner of J Street and Pleasant Ave in Tulare and Boling's Floor Covering. He worked as a mechanic, transmission specialist, farmer, flooring installer, and others until his last job working in aluminum and steel construction. He continued with that until he retired at the age of 62. David had a passion for working with his hands. His favorite was working on Ford engines, trucks and cars, but he didn't stop there. He was a capable builder with all materials and had a wealth of knowledge, earned from experience in many fields. From floor to roof, David built onto & maintained his own home, shop and vehicles all the way up to his last days. To those that didn't know him well, David may have come off as a serious individual, but he loved to joke with others, tell stories and share memories. He also loved to sneak action photos of family members during holidays and would jokingly fight others over sweets, especially when it came to pie. Sweets were one of his favorite things and you could always find at least five different sweet treats on his desk at any given time. He had a love of Western History movies and novels. He appreciated the architecture and decor of the time, as well as for black powder rifles and pistols. He had also been a prominent figure at the Tulare County Renaissance Festival for many years and still had his sword from when he was knighted. David is survived by his wife, Aileen, his two children, Julia and Charles, and two granddaughters, Quorra and Gwendolyn. Services have been entrusted to Salser & Dillard Funeral Chapel. Memorial Tributes and condolences may be offered by logging onto www.salseranddillard.com.

The family of David Irvin Boling, Jr created this Life Tributes page to make it easy to share your memories.

Send flowers to the Boling family.