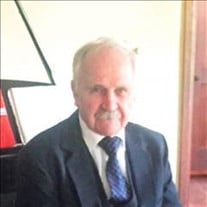 Daniel Bruce Bagley, 81 stepped into eternity on Sunday 1/30/2022. Dan was born to Emil Bagley and Ovidia Hansen on July 4th, 1940 in Bismark, North Dakota. Dan grew up in rural Northern Minnesota. His dad was a Lutheran Pastor and his mom and dad had eleven children. Dan graduated from Middle River HS in the class of 1958. He lettered in Football, Basketball, Track & Field. Dan had four brothers and six sisters. A big, loving family. After High School Dan headed to Augsburg College in Minneapolis, MN where several of his siblings had attended. After two years of higher education Dan joined the US Army and served in Okinawa Japan in Morse Code Intercept. He also was a sharpshooter marksman. In 1966 Dan met Dianne Johnson in Minneapolis. They fell in love quickly and were married in April of 1967. The next six years produced their four amazing children. Family was everything to Dan. Dan worked 15 years for Service Master Hospital Corporation in three states. Dan also worked in management and maintenance in several Retirement Communities in CA. Dan's last five years before retirement was managing a mini storage in Visalia. Dan always loved all sports. He loved fishing and hunting and reading Westerns. But most of all he loved hanging out with family. He also loved attending church and men's Bible Studies at Parkside Chapel Church. He loved reading his Bible and read through the entire Bible many times. Dan is survived by wife, Dianne Bagley. Also survived by son, Shaun Bagley, Daughter Melissa Williams and husband Corey, Son Brent Bagley and wife Cambria, Daughter Shara Lange and husband, Brett. Also survived by 13 grandchildren: Mathew, Kylan, Jaxon, Lucas, Jacob, Wesley, Tess, Mya, Logan, Jet, Braden, Connor, Alexis. Dan will be greatly missed by family and friends. He will be remembered as a laid back guy who never knew a stranger. Not much for crowds but he loved people. He had a sense of humor and enjoyed life to the max. Mostly he enjoyed his family. He was surrounded by his children and grandchildren up until his last day on earth. Dan lived with eternity in view. He was a man of faith and integrity. He was the rock of our home. Now he is with the God he loved and served all of his life. Memorial Service will be held on 2/19/22 at Parkside Chapel, 3200 E Walnut, Visalia, CA 93291 Services have been entrusted to Salser & Dillard Funeral Chapel. Memorial Tributes and condolences may be offered by logging onto www.salseranddillard.com.

Daniel Bruce Bagley, 81 stepped into eternity on Sunday 1/30/2022. Dan was born to Emil Bagley and Ovidia Hansen on July 4th, 1940 in Bismark, North Dakota. Dan grew up in rural Northern Minnesota. His dad was a Lutheran Pastor and his mom and... View Obituary & Service Information

The family of Daniel Bruce Bagley created this Life Tributes page to make it easy to share your memories.

Send flowers to the Bagley family.