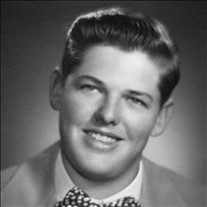 At age 86, Dalton Kerr Valentine, aka "Big D", passed away peacefully on November 14th 2021 in Fresno, California after an extended and brave battle with thyroid cancer. Present in his final moments were his son, Eric, daughter, Kersten, and his eldest son Kent joined via webcam. Some of Dalton's final words were that he has had a good life and that he loves all with whom he has had the privilege to know. Dalton was born on April 26, 1935 to Laura Belle (nee Kerr) and Carl Dalton (Bob) Valentine in Stockton, California where he spent his early years. At age 9 the family, including younger sister Barbara, moved to Delano, California. Dalton completed elementary school in Delano and graduated from Delano High School in 1953. It was there he first discovered photography and took pictures for the school yearbook. Dalton spent a year at Bakersfield College before joining the US Air Force and was stationed in Fairbanks, Alaska where again he gravitated to photography taking pictures of classified military equipment among other things. He loved talking about his time there and travels around the state, but he was never very specific about the work. He was honorably discharged from the Air Force in 1956. After the Air Force, Dalton returned to Delano and completed an AA in college and also spent time helping his father out with his business with Shell Oil. In 1961, he accepted a job with Southern California Edison Company. During 34 years with SCE, Dalton traveled to all corners of Kern and Tulare Counties reading residential and commercial meters. During his career, he witnessed the advancements of technology to where he was able to read a meter while sitting in his truck and never stepping foot on the property. Dalton accepted an early retirement from SCE in 1995. Back in 1958, Dalton met and fell in love with Janet Louise Rasmussen, who had recently moved from Illinois for a teaching position. They married on November 11, 1960 in Carmel, California. They had three children, Kent ('61), Eric ('69) and Kersten ('72). He was a proud father supporting his children through school and all their activities, attending many swim meets, basketball games, football games and water polo games. All three graduated from Delano High and went on to complete 4-year college degrees. Janet and Dalton Divorced in 1984 and he moved to Tulare, California for a few years and then finally to Visalia, California. Dalton never remarried, however he met and fell for Carmelia Silva a few years after he divorced. He devoted the remaining years of his life to putting a smile on her face every chance he could. Dalton enjoyed spending time with his good friends Bill Hatzman and Bob Horstein and their families. He could often be found in the mountains of the Sierras at Huntington Lake, Shaver Lake, Big Bear, Big Creek, Arnold, CA (where his parents lived), and Yosemite and in the Sequoia's. During the late 80's and 90's he was part of an airplane gliders club for remote operated miniature airplane gliders. Later in the 2000's he joined many photography adventure classes around in the Sierra's to hone his photo skills and eventually joined a photography club based out of Hanford, California where he remained part the board until about 2018. In 1998 Dalton took one of his most memorable trips when he and several friends, "his boys", flew to Italy and floated through the Venice Canals in addition to photographing and witnessing many other beautiful architectural, artistic and culinary delights. Dalton also loved watching sports whenever he had the chance - basketball and boxing being his favorite. Dalton is survived by his son Kent and his wife Meg; grandchildren Sam and Kit Kat; son Eric and wife Robin; daughter Kersten and fiance Eric; nephew Kevin McLane; niece Carry Cubbage and husband Bill; great nephew and niece William and Belle; and many cousins. He was preceded in death by an infant younger brother, Robert; nephew Shane McLane; parents, Bob and Belle Valentine; sister Barbara, and her husband Chuck; and life partner, Carmelia Silva. A Celebration of Dalton's life will be held at 2pm Tuesday, December 21, 2021 at Salser and Dillard Funeral Chapel located at 127 E. Caldwell Ave Visalia, CA 93277. After the service, the celebration and sharing of personal stories will continue at Dalton's residence at 831 S Pinkham St, Visalia CA 93292. Light refreshments will be provided. Services have been entrusted to Salser & Dillard Funeral Chapel. Memorial Tributes and condolences may be offered by logging onto www.salseranddillard.com.

At age 86, Dalton Kerr Valentine, aka "Big D", passed away peacefully on November 14th 2021 in Fresno, California after an extended and brave battle with thyroid cancer. Present in his final moments were his son, Eric, daughter, Kersten, and... View Obituary & Service Information

The family of Dalton Kerr Valentine created this Life Tributes page to make it easy to share your memories.

Send flowers to the Valentine family.