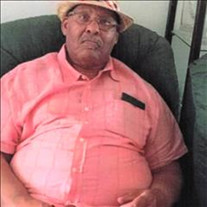 Clyde Henderson was born in Alameda, California on May 31, 1948, to Ivory and Lorean Henderson. He was the 3rd of 4 children. Clyde accepted Christ at an early age. Clyde was always eager to excel at everything he did. He was what you called a Gentle Saint, as he did not talk a lot but when he did, you listened. Clyde grew up in Venice, Culver City, and Los Angeles. He went to Broddock Elementary School, Marina Del Rey Junior High, and Darsey High School. Clyde graduated from Darsey High School in 1966. He later continued his education at Los Angeles Technical College. Clyde enjoyed spending time with family and friends and watching sports, most of all football and basketball. He had a heart of gold and was very personable to everyone he met. Clyde started doing maintenance work at an early age, working for his Aunt Lucy, who had a janitorial service. He went on to work for several janitorial services, before moving to Nashville, Tennessee in 1991. He worked 17 years for the Nashville School system where he was a supervisor. In 1971, Clyde met Patricia Simon in Mar Vista Gardens, where he was living with his sister. After getting to know Patricia and her 5 children, he decided to take the relationship to the next step, and in 1972 they were married. Clyde was a no-nonsense type of man but he was always there for whoever needed him. All the children came to love him as much as he loved them. Clyde will truly be missed by everyone that was in his life, but he will live on through the memories we all have of him. Clyde is preceded in death by his stepson, Keith Simon, brother-in-law Melvin Hickman, his father and mother-in-law, Lister and Danny Hickman, his father and mother, Ivory and Lorean Henderson, a special Aunt Lucy Clayborn McCraw (who helped raise him), two sister-in-laws, Annie Helms and Girda (Cookie) Henderson, 2 nephews, Gary and Brian Helms and brother Billie Henderson (Nora). Clyde leaves to cherish his memory, his wife of 49 years, Patricia Henderson, 4 children, Debbie Simon, Cheryl King (William), Eric Simon (Dara) and Tommy Simon, all of Nashville, Tennessee. He also leaves behind 1 brother-in-law, Morris Hickman of California, 13 grandchildren, Irene Phillips, Shanna Thomas, Martish Washington, Brandy and Britney Nora, Shantia Poole, Stephine Rose, Jadon Simon, Chanel and Deon Simon, Nikko Simon, Dyon Simon, Eric Davis, Steven Rose, 21 great grandchildren, his brother Henry Helms Sr. of Arkadelphia, Arkansas, his sister Erma Andrews of Visalia, California, his special nephews Henry Helms, Jr. and Kevin L. Henderson, 2 special nieces Shawn Davis and Jasimen Metcalf, a special, special niece Twanna Andrews, also his nieces Kim Helms, Pamela Helms, and Gwendolyn Hoxey, his nephews, Anthony Soil, Sr. and Ramon Jamar, a special friend Phil Shockley and a special cousin Barbara Tyler, a host of great nieces and nephews, cousins, and friends. Clyde was called upon by God's Holy Command to leave this temporary life and begin his eternal life to forever dwell in the presence of the Lord. A Visitation will be held Saturday, July 10th at 1PM at Salser & Dillard Funeral Chapel, 127 E. Caldwell Ave., Visalia, CA 93277. A Funeral Service will be held Saturday, July 10th at 2PM at Salser & Dillard Funeral Chapel.

Clyde Henderson was born in Alameda, California on May 31, 1948, to Ivory and Lorean Henderson. He was the 3rd of 4 children. Clyde accepted Christ at an early age. Clyde was always eager to excel at everything he did. He was what you called... View Obituary & Service Information

The family of Clyde Henderson created this Life Tributes page to make it easy to share your memories.