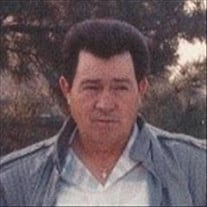 In a bittersweet moment another angel has found their wings & has set off on flight safe into the arms of God & to those gone before them. Charles E. Ross, age 78, passed away peacefully on Wednesday April 21, 2021 at Evergreen Residence Assisted living in Visalia California following a lengthy battle with Alzheimer's. Charles was born June 26, 1942 to Charles and Bertha Ross in Trumann, Arkansas. Preceded in death by his grandparents Luis Ross and Lula (Christy) Ross; father Charles W. Ross and mother Bertha E. (Pipkin) Ross. Mr. Ross is survived by his loving devoted wife Beverly Ross; Children, Judy Scruggs, Charles Ross JR and Douglas Duerr; grandchildren, Brandon Shook, Sarah Shook, Courtney Haisty and Madison Ragland; great grandchildren, Kolton Sanders, Ryland Shook and Charley Haisty. Further survived by his sister Juanita Patton and brother Alvin Ross along with many nieces and nephews. At a very young age he learned to work hard helping his father in the field picking cotton. In his adolescence the family left Arkansas and moved to California where at age 17 Charles joined the Navy. Later in life he worked as a Class A Foreman at W. M. Lyles for 27 years and Vice President of the local Teamsters Union for 24. Charles took great pride in his work and it showed in each and every job he did. Some of those jobs included Badger Hill (Housing & Development), off Hwy 198 near Exeter; Golden West High School; The Ronald Reagan Presidential Library; several jobs at Lemoore Naval Air Station; and hundreds of miles of gas, electrical, telephone, sewer, water, storm drain, and irrigation lines for Southern California Gas, Southern California Edison, Cal Water, Pacific Telephone, and virtually every city and county within 50 miles of Visalia. Charlie also helped build several California State Prisons such as Avenal, Delano, Corcoran and Soledad. His co-worker Mike Burson, of 20 years, stated "It was a great pleasure and honor to know Charlie. He exemplified the kind of professional, yet caring, company we were." His grandchildren recall many drives from their home in Porterville to Charlies home in Visalia in his white Ford where he pointed out work he had done along the way. When he was not working, he enjoyed time with his family. You could be sure to find him doing yard work, playing with his grandkids or visiting his mother on the weekends. He was not only a devoted father and hard-working man but an amazing grandfather. Charlie will be forever remembered for his caring heart, loving embrace and unconditional love. Although our hearts are heavy, we will celebrate his life and find comfort that he is in heaven with a healed mind and body watching over us. A Rosary will be held 11:00am on May 7, 2021 at Salser & Dillard Funeral Chapel . Services have been entrusted to Salser & Dillard Funeral Chapel. Memorial Tributes and condolences may be offered by logging onto www.salseranddillard.com.

In a bittersweet moment another angel has found their wings & has set off on flight safe into the arms of God & to those gone before them. Charles E. Ross, age 78, passed away peacefully on Wednesday April 21, 2021 at Evergreen Residence Assisted... View Obituary & Service Information

The family of Charles E Ross created this Life Tributes page to make it easy to share your memories.

In a bittersweet moment another angel has found their wings &amp;...

Send flowers to the Ross family.