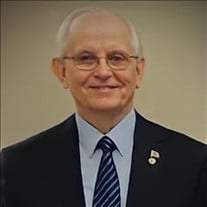 On October 3, 2021, Charles Thomas Douglass passed away peacefully surrounded by his family in Visalia, CA after a long battle with Prostate Cancer. He was 77 years old. Charles was born on October 13, 1943 in Upland, CA. He graduated from Orosi High School in 1961 and went on to attend University of Redlands where he graduated in 1965 with a Bachelor of Science in Biology. After graduation, he married his high school sweetheart, Marilee in 1966. They lived in Berkley where they gave birth to their first child, Eric in 1968. Charles continued his education and graduated in 1969 with a Master of Divinity in Pastoral Counseling from Berkeley Baptist Divinity School and was ordained to American Baptist Ministry. In 1971 he received a Master of Theology in Counseling from American Baptist Seminary of the West. Charles moved back to the valley and settled in Visalia in 1970. At this time, he started his career in mental health services working for Kings View. It was not long after relocating that he and Marilee welcomed their daughter, Heather, into the world in 1973. Furthering his career and education, Charles received a Master in Social Work from California State University, Fresno in 1978. He was a Licensed Marriage and Family Therapist and a Licensed Clinical Social Worker. He provided mental health services for over 45 years. Charles had a love of God, music and service. He was a member of Fountain Christian Church where he shared his passion and many musical talents. He was also a member of the West Visalia Kiwanis Club for over 40 years and was an Embedded Therapist with A Co. 1-184th California National Guard for 7 years. Charles is survived Marilee Douglass, his wife of 55 years; their children, son Eric Douglass and his wife Kim Douglass of Visalia, CA; daughter Heather Bixler and her husband Matthew Bixler of Visalia, CA; brother James Douglass and his wife Andronetta of Bellingham, WA.; and three grandchildren Hannah Douglass of Visalia; Keira and Patrick Bixler of Visalia. He was preceded in death by his father, Rev. Alfred Douglass; mother Mildred Douglass and brother Greg Douglass. A memorial service is scheduled for Thursday October 21, 2021 at 2pm at The Fountain Christian Church in Visalia, CA. In lieu of flowers donations can be sent to West Visalia Kiwanis Club Student Loan Foundation Inc In memory of Charles Douglass c/o M Green and Company LLP PO Box 3330 Visalia, CA, 93278-3330 Services have been entrusted to Salser & Dillard Funeral Chapel. Memorial Tributes and condolences may be offered by logging onto www.salseranddillard.com.

On October 3, 2021, Charles Thomas Douglass passed away peacefully surrounded by his family in Visalia, CA after a long battle with Prostate Cancer. He was 77 years old. Charles was born on October 13, 1943 in Upland, CA. He graduated from Orosi... View Obituary & Service Information

The family of Charles Thomas Douglass created this Life Tributes page to make it easy to share your memories.

Send flowers to the Douglass family.