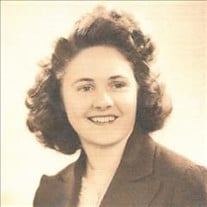 Cecelia (Cece) Rosina Brinkman, 96, passed away June 5, 2021 in Visalia, CA. She was born April 5, 1925 to Henry and Johanna Wawers in Sonora, North Dakota, the second of four children. As a child, her family moved to the Hankinson, North Dakota area where her family farmed. She began school in a one-room house as a four-year old, in an attempt by her mother to get her older brother to go to school. As a 13-year-old, Cece was sent to live with a family member so that she could attend high school at St. Francis Academy in Hankinson. She graduated from St. Francis in 1942 as class valedictorian, and moved to Fargo, ND to attend business school. Upon graduation, she worked as a receptionist/bookkeeper for a small firm until she moved to California to marry her high school sweetheart, Jim Brinkman. Jim had joined the Marine Corps after attending St. John's University for a year and was being shipped out to the South Pacific. Mom often told the story that she remembered being a 9th grader and seeing a dark-haired, freckle-faced boy smiling at her, but their first date was not until graduation night when he told her that he was going to marry her. Jim and Cece were married on May 19, 1944, on Treasure Island in San Francisco, CA. After their marriage, Cece moved back to Eagle Rock, CA to work and later moved home to Hankinson while Jim was in the South Pacific. Jim was sent home early from the Pacific theater, as his father had passed away as he was the oldest boy in the family of 8 children. They established a home in Hankinson until the fall of 1947, when Jim and Cece moved to Grand Forks, ND, where Jim attended the University of North Dakota. Upon graduation, the family moved to East Grand Forks, Minnesota, where Jim taught History and coached at Sacred Heart High School. When Jim coached on Friday nights, Cece would go with a friend to scout other teams, so that he could prepare for upcoming games. They spent a year in 1958-1959 in Bismark, ND, and then in the summer of 1959, moved the family to Porterville, CA, as Jim had accepted a job as a teacher/coach for Strathmore High School. The children attended St. Anne's Elementary School and mom became active in the Mother's Club and volunteered her time to work in the library. In 1977, the family moved to Visalia, CA where she resided until her death. Cecelia was preceded in death by her husband of 50 years, Jim, her parents, and an older brother, Sylvester. She is survived by her brother, Alois and her sister, Shirley. She leaves behind her daughter, Bonnie Armstrong and her husband John; her son, Stephen and his wife, Anna; her son, James and his wife, Lynda; her son, Donald and his wife, Jane; her daughter, Enid; her daughter, Erin Dynek and husband, Kerry; her son, Brian; 12 grandchildren and 10 great-grandchildren Mom was always the smartest, most informed person in the room. She read two newspapers a day and always had a book beside her bed stand. She had a marvelous head for business and finance and returned to the work force in her late 50's as a bookkeeper for Knudsen and later for Oakmore Ag Management in the Visalia area. Mom was passionate about her beliefs and unafraid to make her positions clear when it came to politics and religion. A private family viewing will be held at 5:00 p.m. on Thursday, June 17th at Salser and Dillard, followed by the rosary at 6:00 p.m. Mass will be held at 9:00 a.m. on Friday morning, June 18th, at St. Mary's Catholic Church in Visalia. Interment will follow at Visalia District Cemetery. Donations in Mom's name may be made to the donor's favorite charity. Condolences may be offered by logging onto www.salseranddillard.com.

Cecelia (Cece) Rosina Brinkman, 96, passed away June 5, 2021 in Visalia, CA. She was born April 5, 1925 to Henry and Johanna Wawers in Sonora, North Dakota, the second of four children. As a child, her family moved to the Hankinson, North Dakota... View Obituary & Service Information

The family of Cecelia Brinkman created this Life Tributes page to make it easy to share your memories.

Send flowers to the Brinkman family.