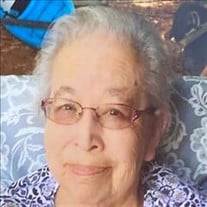 Carmelita T. Hernandez passed away peacefully at her home in Visalia, California, on April 1, 2021, with family at her side. She was 84 years old. Carmelita was born on February 18, 1937, in Visalia, California. She attended Mt. Whitney High School and became a diligent seamstress, chef, and custodian at Golden West High School until her retirement in 1994. After retirement, Carmelita loved being active and spoiling her grandchildren, spending time caring for them, teaching them to cook tamales, as well as various life lessons with her wit and charm. She enjoyed being with family, talking to others, reading several novels a week, and volunteering her time, including serving at Foodlink For Tulare County. Carmelita is preceded in death by her father, Emiliano Torres, her brothers, Manual and Bernardo Torres, her grandson, Christopher Hernandez, and son-in-law, Dennis R. Myers. Carmelita is survived by her brother Ramiro Torres (Frances Torres); her five children: Veronica Myers, Ricardo Hernandez (Maci Hernandez), Diana Seltzer, Martha Goldman (Steve Goldman), and Michael Hernandez (Christina Hernandez); her eight grandchildren, and fourteen great-grandchildren. Services will be held for her family at Salser and Dillard Funeral Chapel on April 19, followed by a private burial on April 20.

The family of Carmelita Torres Hernandez created this Life Tributes page to make it easy to share your memories.

Carmelita T. Hernandez passed away peacefully at her home in...

Send flowers to the Hernandez family.