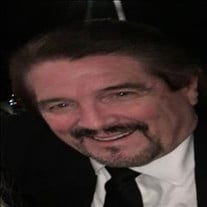 Our beloved Bruce Alan Hunt, 72, of Visalia, California, "graduated" to the heavenly realms on March 14, 2022, following a brief and valiant journey with pancreatic cancer. Bruce was an avid enthusiast of both mathematics and fruit pies, so... View Obituary & Service Information

The family of Bruce Alan Hunt created this Life Tributes page to make it easy to share your memories.

Send flowers to the Hunt family.