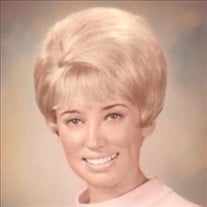 On the early morning of March 29th, 2022, Beverly "Diane" Walter was called home to rest in the arms of our Loving Father. Beloved Mother, Gigi, and Friend. If you knew Diane, you knew she was the light of every room. Born on November 28th, 1948 in Tulare, CA to James and Doris Garrison, she was the first of two daughters. In her younger years, Diane could be found playing piano during church services and singing in the church choir. She attended and graduated from Tulare Union High School in 1966. Diane attended College of the Sequoias in Visalia, CA before moving to the Bay Area. After several years up North, Diane returned to the Central Valley making Visalia her home. Here she spent her time working and running around with friends, cousins, and family. In May of 1988 she earned the title of Mom when her only child, Chrissy, was born. She was a wonderful mother, and very active in her daughters life. They shared a bond like no other. Many vacations, birthday parties, and girls nights were shared. She was always the first to volunteer in Chrissy's activities, and was often the mom who always had a group of kids with her. Diane had a passion for shopping and decorating which she shared with her mother, Doris. Both Doris and Diane shared that passion with Chrissy, which led to lots of girls afternoons spent at Gottschalks and the mall. She would often drive to Fresno or Bakersfield if it meant she would find the perfect decor. Diane retired from Visalia Unified School District having worked in Human Resources. Many people recognized her smiling face from the District Office. She had many friends and cousins whom she enjoyed spending time with. From Hawaiian vacations to wine tasting trips and game nights, she was always on the go. It was rare if you could find Diane at home. She loved going out to lunch with friends and having a margarita break while out shopping. In 2021 Diane gained her most valuable title, Gigi. Her only grandchild, Archer, was born on April 4th, 2021. Archer was the light of his Gigi's life. She loved to spoil him, and he knew it. Many Saturdays were spent at Gigi's pool going swimming to beat the heat. Weekly lunch dates at Rainbow Drive-In was one thing she looked forward to the most. She shared her love of Christmas by taking him to the Cambria Christmas Market to look at all the Christmas lights. Gigi and Archer shared such a special bond. She will be dearly missed by all that knew and loved her, but especially by her daughter and grandson. The world will be a little less bright without her beautiful smile. Her joy was infectious and always filled the room. Diane is survived by her Mother, Doris Garrison; Daughter, Chrissy and Son-in-law Alex; Grandson, Archer; Sister, Sharon and many cousins, friends, and family. She is preceded in death by her father, James Garrison. "There are some who bring a light so great to the world, that even after they have gone, the light remains." Beverly Diane Walter, 73 of Visalia, California, died on Tuesday, March 29, 2022, in Visalia, California. Beverly was born to James Hallie Garrison and Doris Marie Stockton on November 28, 1948 in Tulare, California. Viewing will be held 9 AM - 10 AM Wednesday, April 20th, 2022 at Rise Church, 5207 West Caldwell Ave, Visalia. Celebration Of Life services will be held 10 AM Wednesday, April 20th, 2022 at Rise Church. Graveside services will be held 12 PM Wednesday, April 20th, 2022 at Tulare Cemetery, 900 E. Kern Ave., Tulare. Services have been entrusted to Salser & Dillard Funeral Chapel. Memorial Tributes and condolences may be offered by logging onto www.salseranddillard.com.

On the early morning of March 29th, 2022, Beverly "Diane" Walter was called home to rest in the arms of our Loving Father. Beloved Mother, Gigi, and Friend. If you knew Diane, you knew she was the light of every room. Born on November 28th,... View Obituary & Service Information

The family of Beverly Diane Walter created this Life Tributes page to make it easy to share your memories.

Send flowers to the Walter family.