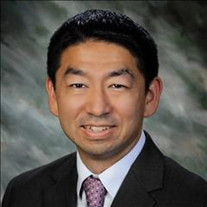 A compassionate doctor, husband, father, and friend to all, Dr. Benjamin Joseph Brennan returned to his heavenly home on November 23, 2021 at age 47 due to stomach cancer. Ben was adopted as a toddler from Ilsan, South Korea in 1977 by David and Marie Brennan, who raised him in Mont Vernon, New Hampshire and Louisville, Kentucky. He was a cheerful child and grinned and laughed often. He was a soccer player and a scholar, graduating third in his high school class. As a young adult he self-funded his two-year mission in which he taught the gospel of Jesus Christ in Hawai'i. Ben earned a bachelor's and a master's degree in biochemistry from Brigham Young University. There, he met Laurel Witham of Dublin, California, and the two married and began a life together in 2003. Ben taught math and chemistry for four years at Brigham Young University-Idaho. He was deeply interested in teaching to his students' needs, ensuring they understood the concepts. Ben had so much passion for helping people that he went back to school and earned a medical degree from University of Utah in 2011 and completed his training in the McKay-Dee Family Medicine Residency in Ogden, Utah. Three wonderful daughters were born to the Brennans during these teaching and medical school years. The Brennans moved to Visalia in 2014, where Dr. Brennan devotedly attended to his community's health needs up until his death, working as a physician at Visalia Medical Clinic/Kaweah Health Medical Group, where he also spent some time serving as president of the executive board. Dr. Brennan's patients typically claim that he was very friendly, making their concerns his own and giving them plenty of time for discussion. Around town, Dr. Brennan often ran into patients and he would thoughtfully inquire about their progress with their health. Co-workers report that he never turned away a patient. The birth of Ben and Laurel's fourth child, Joseph, in 2019, brought joy and light into their home. Ben was a member of The Church of Jesus Christ of Latter-Day Saints throughout his life, and his great faith was shown in how he lived. He served in many capacities in the Church, giving of his time and energy freely. Ben was an outdoor enthusiast and was especially into wakeboarding, inland surfing, cycling, and canyoneering. He radiated excitement for adventure and brought his family along for most trips. Ben mentored many youth while volunteering in the Boy Scouts of America; he continually modeled for them his mantra of "I can do hard things." He also coached for the American Youth Soccer Organization for several years. Ben has touched so many lives that it is easy to see he has made the world a better place. Ben is survived by his wife, Laurel Brennan; their children, Rebecca, Emily, Olivia and Joseph Brennan; his parents, David and Marie Brennan, of Putnam, Connecticut; and siblings, Adam Brennan (Ina) of Crestwood, Kentucky; Jesse Brennan (Mindy) of Jeffersonville, Indiana; Jonathan Brennan of Fredericksburg, Indiana; Cynthia Rhode (Kevin) of Biddeford, Maine; Katrina, Alice and Patrick Brennan, all of Putnam, Connecticut; and foster brother Ron Chafee (Sheryl) of Greensboro, Vermont. Memorial services will be held at The Church of Jesus Christ of Latter-Day Saints at 650 N. Lovers Lane on Saturday, December 4, 2021 at 11 am, with a public viewing from 9 to 10:30 am. Funeral arrangements provided by Salser & Dillard Funeral Chapel. The family wishes to collect stories about Dr. Brennan, and any stories may be submitted at www.salseranddillard.com . In lieu of flowers, consider making a donation to the Gastric Cancer Foundation.

A compassionate doctor, husband, father, and friend to all, Dr. Benjamin Joseph Brennan returned to his heavenly home on November 23, 2021 at age 47 due to stomach cancer. Ben was adopted as a toddler from Ilsan, South Korea in 1977 by David... View Obituary & Service Information

The family of Dr. Ben Brennan created this Life Tributes page to make it easy to share your memories.

A compassionate doctor, husband, father, and friend to all, Dr....

Send flowers to the Brennan family.