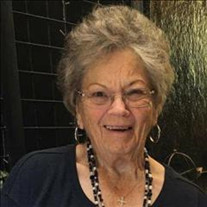 Mrs. Barbara Zearley left her earthly body and joined other saints in Heaven on August 29, 2021. Born on Sept 18, 1940 in Visalia California, she was born the first child of Floyd and Fannie Peel, (both deceased) and is survived by her one sister Sue Peel. At the age of 18, after graduating from Mount Whitney High school, she married her high school sweetheart Therman Zearley in 1959. They were married for more than 62 years. They both became Christ Followers and were baptized at Woodland Drive Southern Baptist Church in Visalia CA in 1963. They have three children, Jeff and his wife Shelley, Ron, and Tim and his wife Stephanie. They had four grand-children, Garin (deceased), Haleigh, Peyton, and Madison Zearley. Barbara spent most of her life in Visalia, CA. She spent the majority of her life as a devoted wife, a loving mother to her boys, a "spoiler" to her 4 grandchildren, and a loving sister. She is known for her cowbell at her son's athletic events. Although she only had 3 birth sons, she had hundreds of others who called her mom. The family attended Faith Baptist church for many years. Barbara was a solid Christian woman who always had a smile on her face. Barbara is survived by her husband Therman Zearley, sister Sue Peel, son Jeff and his family, wife Shelley, daughter Peyton, son Ron, son Tim and his family, wife Stephanie, daughters Haleigh and Madison. She is preceded in heaven by her grandson Garin. A memorial get-together of family and friends will be held in her honor on September 17th at 11am held at Sierra Village, 1 Molenstraat Visalia CA. Services have been entrusted to Salser & Dillard Funeral Chapel. Memorial Tributes, condolences, and stories may be offered by logging onto www.salseranddillard.com. If you wish to send flowers, you may also use the same link.

Mrs. Barbara Zearley left her earthly body and joined other saints in Heaven on August 29, 2021. Born on Sept 18, 1940 in Visalia California, she was born the first child of Floyd and Fannie Peel, (both deceased) and is survived by her one sister... View Obituary & Service Information

The family of Barbara Ann Zearley created this Life Tributes page to make it easy to share your memories.

Send flowers to the Zearley family.