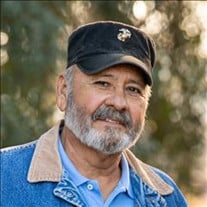 Antonio "Tony" Tadeo Contreras, age 69, passed away on February 12, 2021 at Lake Kaweah in Three Rivers, CA. Tony was born on April 29, 1951 in Harlingen, Texas, to Jesus and Virginia Contreras. Tony was the oldest of six siblings to include: Sister - Lupe Guerrero, Brother - Gilbert Contreras, Brother - Danny Palomo, Sister - Patricia Maldonado, Brother - Alfredo Palomo. In the early 1960's, Tony and his family moved from Texas to the small town of Woodlake. During his time of growing up in Woodlake, Tony attended Woodlake Schools and graduated from Woodlake High School in 1971. Upon graduating from Woodlake High School, Tony enlisted in the US Marine Corps and was stationed in Camp Pendleton, CA. Upon receiving an Honorable Discharge from the US Marine Corps, Tony moved back to Woodlake where he worked for the City of Woodlake for a short period of time before being hired on with the Woodlake School District. Tony worked for the Woodlake School District from the late 70's till the early 90's, when he decided to go back to school and get his advanced degree in education. While finishing up his college degree, Tony started working at Exeter High School and eventually transferred to Wilson Elementary School as a Para-educator where he would retire in the year 2020 with approximately 20 years of service to the Exeter School District. Tony enjoyed being in the educational field and felt his contribution to impact the lives of students and people throughout the communities of Woodlake and Exeter was his pride and joy. In 1980, while working at the Woodlake School District, Tony met his soon to be wife, Patricia Contreras. On May 2, 1981 Tony and Patty got married in Lake Tahoe, Nevada and made their home in Woodlake. Upon being married to Patty, Tony inherited a son, Matt Conley, to which he raised as his own. In 1982 Tony became a father once again welcoming his daughter, Rosalynda Contreras, into this world. Tony was a fun, loving, caring, dedicated father, husband, and friend to his family. Tony didn't know any stranger. Tony enjoyed being outdoors, camping, fishing, spending time with family & friends, riding his Harley and cruising in his 1963 Impala. Tony was very creative in the art of wood craft building, tinkering on vehicles, and fixing many things around the house. Tony was preceded in death by his Mother- Virgina Palomo, Father- Jesus Contreras, Step-Father Nieves Palomo, and Sister - Rosalinda Contreras. Tony is survived by his loving wife of 39 years, Patricia Contreras; his son, Matt Conley and wife Kristen; daughter Rose Mazon and husband Mark. Tony has five glorious grandchildren, Sean & Audrey Conley; Rhyenne, Charleigh & Tommye Mazon. Tony leaves behind his memory to his brothers, brother in-laws, sisters, and sister in-laws; along with many aunts, uncles, cousins, nieces, nephews, god children, and many friends. Tony will be greatly missed. Services have been entrusted to Salser & Dillard Funeral Chapel. Memorial Tributes and condolences may be offered by logging onto www.salseranddillard.com.

Antonio "Tony" Tadeo Contreras, age 69, passed away on February 12, 2021 at Lake Kaweah in Three Rivers, CA. Tony was born on April 29, 1951 in Harlingen, Texas, to Jesus and Virginia Contreras. Tony was the oldest of six siblings to include:... View Obituary & Service Information

The family of Antonio Tadeo Contreras created this Life Tributes page to make it easy to share your memories.

Send flowers to the Contreras family.