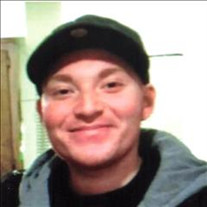 Anthony was born in Van Nuys, CA on August 28, 1997. He was attending John Muir Charter School in Visalia and working part-time in landscaping with his friend, Jim. Anthony attended Montessori Pre-school in Sylmar, CA, St. John De La Salle in Granada Hills, CA and Granada Hills Charter High School. Sports was his passion. At a you ng age he advanced in baseball, playing for S.I.B.L., Santa Rosa, Black Widows, Team USA for Nationals, Trojan football for East Valley Van Nuys and basketball in Sylmar, CA. He was mentored in Jiu Jitzu and Brazilian Muay Thai. He spent his time training and became part of the wrestling team for Granada. His dad Lando was one of his coaches, biggest fan and supporter. His NFL team was the Denver Broncos. Many knew Anthony as "Huero, Antz and Red". He resided his last six years with his dad Lando and his Grandma Patsy in Visalia. His father, Orlando Joseph Ruiz preceded him in death. Anthony will be laid to rest with his dad Lando at the Visalia Cemetery at a later date. He is survived by his mother, Cori E. Gallegos of Chatsworth, CA, his grandmothers, Patsy A. Ruiz of Visalia, CA, and June Engelberg of Northridge, CA, his sisters, Crystal Marie Ruiz of Las Vegas, NV and Sophia Patricia Ruiz of Visalia, CA, his brother Andrew J. Engelberg of Chatsworth, CA, his nephews, Nathan Paul Peral and Alexander Orlando Perez and niece, Beya Bessie Perez of Las Vegas, NV. Anthony leaves behind aunts, uncles, numerous cousins and friends, coaches and his dog Bear, who was his pride and joy! Anthony you will forever live on in spirit and in our hearts. Never goodbye, always see you later Amor. I love you "My Huero". Celebration Of Life services will be held 2 PM Friday, April 29th, 2022 at Salser & Dillard Funeral Chapel, 127 E. Caldwell Ave., Visalia. Services have been entrusted to Salser & Dillard Funeral Chapel. Memorial Tributes and condolences may be offered by logging onto www.salseranddillard.com.

The family of Anthony Orlando Ruiz created this Life Tributes page to make it easy to share your memories.

Send flowers to the Ruiz family.