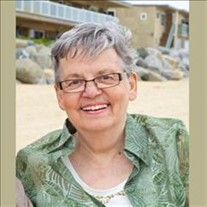 Amelia P. Cotta passed away peacefully on June 27, 2021 surrounded by her family. She was born on November 1, 1927 in Visalia, California and was the seventh of eight children born to Antonio B. and Adelaide C. Enas. She graduated from Visalia Union High School in 1946. Amelia married Anthony (Tony) Cotta on August, 21, 1949 until Tony's passing in 1987. The couple made their first home in Tipton, California for three years before permanently returning to Visalia, where they raised their three daughters. Amelia worked at the COS Bookstore before starting her family and then spent many years as a homemaker. She began working at Ensigns Department Store in 1979, and then later at Target until she was in her 80's. Amelia was a member of St. Mary's Church, Catholic Daughters, U.P.P.E.C., and Luso American Society. She enjoyed baking cookies and candy, especially at Christmas time, and became known as Grandma Fudge by her grandchildren. She also enjoyed music of the 1940's and reading all types of books. She always had music playing in the house and a book by her chair. Her gentle spirit and kind nature were always present. Amelia loved to be around family and enjoyed spending time playing cards with her sisters, daughters, and family. She lived at Quail Park the last seven years of her life. The family would like to thank the Quail Park and EAL staff for their compassionate care and support that they provided to our mom throughout her stay there and especially her final days. Amelia was preceded in death by her parents Antonio and Adelaide Enas; her beloved husband, Tony Cotta; her seven siblings, Marie Miranda; Adelaide Ross; Ursula Enas; Victoria Mayhew; Margaret Enas; Antone Enas; and Delphina Perry. Amelia will be lovingly remembered by her daughters, Joan Wedel (Tom), Caroline LeQuieu (Mike), and Janet Wylie (Jim), her grandchildren Erika Smithey (Joe); Christopher Wedel (Karla); Monica LeQuieu; Logan LeQuieu; Benjamin Wylie; Spencer Wylie; and Stella Wylie; and her great-grandchildren, Gracie Smithey; Parker Smithey; Lucy Smithey; and Miles Wedel; and many nieces and nephews. The Recitation of the Rosary will be held Monday, July 12, 2021 at 6:00pm at Salser & Dillard Funeral Chapel, 127 E. Caldwell Ave., Visalia. Mass of Christian Burial will be celebrated Tuesday, July 13, 2021, at 9:00 am at St. Mary's Catholic Church, 608 N. Church St., Visalia with the burial to immediately follow at Visalia Cemetery. Memorial donations in lieu of flowers may be made to the Alzheimer's Foundation of America. Memorial Tributes and condolences may be offered by logging onto www.salseranddillard.com.

Amelia P. Cotta passed away peacefully on June 27, 2021 surrounded by her family. She was born on November 1, 1927 in Visalia, California and was the seventh of eight children born to Antonio B. and Adelaide C. Enas. She graduated from Visalia... View Obituary & Service Information

The family of Amelia Patricia Cotta created this Life Tributes page to make it easy to share your memories.

Send flowers to the Cotta family.