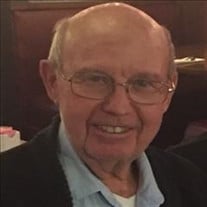 Alva "Reed" Roberts, beloved father and grandfather went home to our Heavenly Father on September 26, 2021, shortly before his 88th birthday. Preceding him in death was his wife Sue Mavis Price Roberts and son Leslie Reed Roberts. Reed was born on November 10, 1933 to James Holly Roberts and Marie Laura Smedley in Pryor, Oklahoma, the seventh of eight children. He was the last of his siblings to past. In Oklahoma, Reed developed his love of horses while working the family farm. The family moved to Visalia California in 1945. Reed and Sue were part of the first graduating class of Mt Whitney High School in 1951. The high school sweethearts were married on August 7, 1952 in Visalia. They enjoyed over 60 wonderful years together. They had three children, Holly Roberts Masiel, Leslie Roberts, and Curt Roberts. Reed worked with his wife in their business as ARCO distributors for eight years in Visalia. They also worked their small walnut ranch just east of Visalia. During this time Reed began restoring classic cars and tractors, specializing in T-Birds. This included Sue's beloved red T-Bird, with the license plate SUES T. They were very involved with the local T-Bird club, attending shows, winning countless awards, becoming national level judges. This interest continued after retiring to Sonora, CA in 1994. After Sue's death, Reed moved back to Visalia where he continued to maintain his cars, travel to places he had read about in his expansive collection of history books, and enjoy the company of his family. Reed is sorely missed by his children Holly and Curt, sister-in-laws Nancy Robinson, Connie Starling, and Margie Evans, brother-in-law Bob Starling, and son-in-law Javier Masiel. He is lovingly remembered by his grandchildren, Stephanie Whitt, Michael Barsoum, Suzanne Hernandez, Amanda Barsoum, Samuel Barsoum, Jessica Greer, and their spouses. He will also be missed by his numerous great-grandchildren, companion Vannabeth Trout, and many beloved family members and friends. Visitation will be held at Salser and Dillard Funeral Chapel Wednesday October 13, 2021 between 3-7pm. A service at the Visalia District Cemetery will be held on Thursday October 14, 2021 at 10:30 a.m. This will be followed by a gathering at the Blaine Motorsports Foundation across from Burke Park in Visalia. Driving your classic cars is welcome. Services have been entrusted to Salser & Dillard Funeral Chapel. Memorial Tributes and condolences may be offered by logging onto www.salseranddillard.com. Reed always wanted to be alert and active so donations to the Sansum Clinic in Santa Barbara is appropriate.

The family of Alva Reed Roberts created this Life Tributes page to make it easy to share your memories.

Send flowers to the Roberts family.