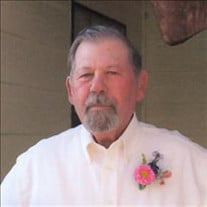 Alan Dale Jenan, 83 of Visalia, California, died on September 02, 2021, in Visalia, California. Alan was born to Clarence Earl Jenan and Robbie Hooten on May 20, 1938, in Visalia, California. He spent 4 years in service to his country with the Navy, discharged as an E5 (second class petty officer) Electronics Foreman. He specialized in working on radios and was the radio operator on the Grumman S2E-G planes. He sure loved flying. With the exception of those 4 years in the service, Alan spent his entire life here in Visalia, working on the family farm which specialized in peaches, plums, nectarines, and in later years grapes and walnuts. His family farm also became the first fumigation operator in Tulare County. Alan attended Visalia High School and later transferred to Mt. Whitney when it was built, graduating in 1956. He was known to say that he was proud of his class for choosing the name of the new high school. He was in the California Cadet Corps at Mt. Whitney and was a member of the Cadet Corps Rifle Team. He also enjoyed playing the clarinet in the marching band. Alan was a very proud conservative and when he wasn't tending to the tomatoes in his garden or reading, he was listening to Rush Limbaugh on talk radio. Alan and his wife, Katie, had known each other year since he was 17 and she was 7, as he was a good friend of Katie's brother in high school. They were together for 42 years and married for 12. He is survived by his wife, Katie Maddox; his three siblings, Roger Jenan, Marjorie Jenan, and Gail Maxon; his nieces, Robin, Christie, Sharon, Jenyfer; his nephews, Michael, Jacob, Mark, Craig; his brother-in-law Jim Maddox; sisters-in-law, Linda Maddox, Jean Maddox; mother-in-law Pat Maddox, and many great-nieces and nephews. Alan will truly be missed by all. Memorial services with military honors will be held 11am Thursday, September 16th, 2021 at Visalia District Cemetery, 1300 W Goshen Ave, Visalia. Services have been entrusted to Salser & Dillard Funeral Chapel. Memorial Tributes and condolences may be offered by logging onto www.salseranddillard.com.

The family of Alan Dale Jenan created this Life Tributes page to make it easy to share your memories.

Send flowers to the Jenan family.